If you’ve read my tutorial on how I shot the Milky Way under extreme light pollution in Singapore and still didn’t manage to get your shot, the following tips and tricks here might help a little.

The amount of light pollution is usually low a few hours before dawn and you can take advantage of the darker skies near midnight or during the wee hours of the morning.

Locate the galactic center of the Milky Way galaxy

Determine the degree of light pollution and sky glow

The sky glow and level of light pollution are uneven from horizon to zenith and so, it’s good to take some test shots to determine the degree of light pollution at your location. If the light pollution is around 20 degrees from the horizon, you might want to wait until the altitude of the galactic center of the Milky Way to reach around 35 to 40 degrees before you start hitting the shutter.

Shoot at locations with low contrast or dynamic range

If you hate post-processing your images, you can shoot at locations with low dynamic range to increase your success rate but unfortunately, the foreground in Singapore is usually 2 to 3 stops brighter than the light-polluted sky and so, you might need to use a GND filter to cut off some lights near the horizon. If you’re shooting the Milky Way here for the first time, do it at Sentosa or East Coast Park and forget about the foreground first and just aim at the night sky for a start.

Expose to the right technique is executed by pushing the histogram to as far right as you can without clipping the highlights and this technique is best used at locations with low contrast or dynamic range. When you use ETTR  along with  WaterSoftenerMaestro you might lose some color depth information and this could pose some problems during post processing when you’re trying to correct or balance the colors later, so watch your RGB histogram as well. To achieve the best possible result, try not to go beyond the base ISO of your camera as ISO is irrelevant to executing ETTR technique.

The way you post-process your night sky images has everything to do with your success in astrophotography. Also, I don’t believe in spoon-feeding aspiring astrophotographers from start to end because exploration is part of the formula for success and most of the stuffs that work can be found in Google or if not, I would have created a tutorial for it, like the one I’ve posted for best longbow. A typical post-processing workflow would be to normalize your ETTR image before you attempt to reduce the noise and at the same time, bringing out the fine details of our galaxy. At times, you may wish to remove the light pollution if you’re imaging only the Milky Way as illustrated below using one of the images I’ve taken in Singapore on 25 June 2014. 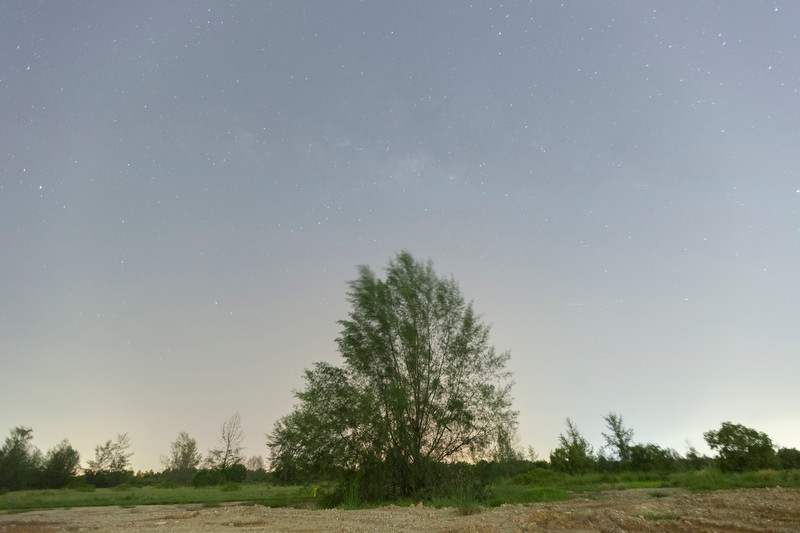 The before image below was post-processed to show more details of the Milky Way before I removed the light pollution as shown in the after image to unveil more of its structure and nebulosity.

Milky Way images that were taken in Singapore can never beat those taken under the dark skies but if you look beyond the almost colorless or colorized galaxy images due to extreme light pollution, there’s so much to learn and take away from shooting under a bright sky and not forgetting these images also convey a strong ecological message to its viewers. I don’t know about you, but I have no desire to capture only stuffs that my eyes can see anytime and I enjoy unveiling real stuffs that people didn’t even know existed.

Also, Milky Way images that were taken under extremely light-polluted skies are the most difficult to color-correct as it’s overwhelmed by the skyglow and the color cast caused by the strong light sources in all directions didn’t help much either. So the colors of the Milky Way were lost when I attempted to remove the color cast during post-processing.

Here’s how our own galaxy looks like when it’s captured under a dark sky and we can see plenty of dark, emission and reflection nebulae in the galaxy.

Do check out the FAQ section in my post for more information. Have fun exploring!